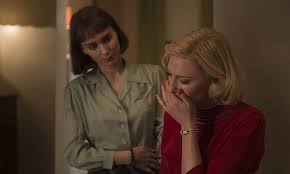 Whoosh! Another film year has now pass, at a speed resembling hyper-space itself. If there’s anything that stood out to me amidst the three-hundred plus releases in 2015, it’s the artist and films that went balls out in creating their visions, no matter what the cost or stakes were, and in the process letting our imaginations go wild. From top-notch biopics to a lesbian romance, one epically-expensive revenge-western, and revamps of cinema’s past, my top ten list celebrates the films with unstoppable ambition from superior craftsman. Here they are –

1. Steve Jobs – No other film this year left me on more of a creative high. With career-best work from writer Aaron Sorkin, director Danny Boyle, and actor Michael Fassbender, this mesmerizing biopic about the late Steve Jobs was highly praised and anticipated before it’s wide release, when staggering box-office numbers suddenly made audiences avoid this fierce and electric tour de force. C’mon people, think for yourselves. You don’t want to miss it.

2. Straight Outta Compton – The biggest music biopic ever was also the most relevant film of the year. This epic, about gangster-rap group N.W.A.’s rise out of Compton in late 80’s Los Angeles and their constant clash with the police, speaks volumes to where we are now, what with police brutality in the news almost every freaking day. From the ace-acting of O’Shea Jackson Jr. playing his dad Ice Cube, and Jason Mitchell as the troubled Eazy-E, to the stellar camera work by Matthew Libatique and direction by F. Gary Grey, it’s explosive in every way.

3. Carol – The best romance of the year. And with the best performances, featuring a never better Rooney Mara as a lost shop-store clerk who falls for Cate Blanchett as the wondrous Carol. This period-piece from director Todd Haynes shows two star-crossed lovers who keep their love at a whisper, before turning it into a triumph of heart and unstoppable, free-thinking spirit. Bravo.

4. The Revenant – Oscar-winning director Alejandro G. Inarritu follows up his award-winning Birdman with a brutal revenge-western about legendary fur-trapper Hugh Glass, played by a colossal and all in Leonardo Dicaprio. Tom Hardy also makes for the best villain of the year as the nasty-son of a bitch Fitzgerald. The soon to be classic bear attack scene won’t be the only part that pushes you to the limit. By filming in the Canadian and Argentinian wilderness, using only natural light, and putting his cast and crew through supposed hell, Inarritu and genius-cinematographer Emmanuel Lubezki create a tale of survival that literally makes you feel as if you’ve survived something by the time the credits roll. Being that it’s still entertaining as hell, I can’t think of a more ambitious goal as a filmmaker. Whether or not the excess budget and gore will be met and embraced by most audiences, there’s no denying this is a cinematic experience like no other, leaving blood all over it’s majestic trail. But will you make it out alive?

5. Room – I got the emotions pulled way the hell out of me with this tense and magical roller coaster. Director Lenny Abrahamson skillfully adapts Emma Donoghue’s novel about a kidnapped mother and her five-year old son, who are held captive his entire life in a one-windowed shed. But Abrahamson scored even more with the HOLY-SHIT performances of Brie Larson as Ma, and Jacob Tremblay as the son Jack. A dream to witness, in every way.

6. Mad Max: Fury Road – The best action film in years stands even higher, with 70-year old director George Miller firing an AK-47 of images and ideas at us throughout his franchise update, and actor Tom Hardy bringing new life to famed road-warrior Max. But no one is fooled in thinking this isn’t Charlize Theron’s show, who just kills it as Furiosa. I’d call it a feminist-knock out.

7. Spotlight – As a fellow journalist, there’s no better thrill at the movies than seeing a mystery film about old-school journalists taking on a ground-breaking story. Director Tom McCarthy guides a grand-scale cast (Michael Keaton, Liev Schreiber, Mark Ruffalo, Rachel McAdams, John Slattery, and Brian d’Arcy James) who play members of the real journalist group Spotlight, who took on and exposed child-abuse and the Catholic Church in Boston.

8. Inside Out – Screw Anomalisa. As far as animated emotions are concerned, no film has nailed it more than this new landmark from Pixar Studios. In showing the emotions battling inside young Riley, creator Pete Docter puts our own emotions to the test. Watch out adults, this one will get to you.

9. Victoria – The best and most ambitious foreign film of the year. Hella-talented director Sebastian Schipper films almost two and a half hours in real-time, no cuts (take that, Birdman), as he and his cameraman track a Spanish woman in Berlin, who overnight gets caught up in a bank robbery. It plays out like a dance that you get lost in, starting with welcoming and pleasant, before turning scary-dangerous. The climactic ending won’t be the only thing that leaves you floored. I’ll also give an honorable mention to Ukraine’s The Tribe, a beautiful yet brutal crime film told completely in sign language.

10. Star Wars: The Force Awakens – The biggest blockbuster in probably ever, J.J. Abrams relaunched the Star Wars saga in ways we never saw coming. In blending a young new cast with the old, the nostalgia of the first three films is thrilling and relentless, all while creating a brave-new road for this now forever-franchise. Whether you love or hate this new chapter, there’s no denying that it will give you the feels, big time.

I would also like to give a shout-out to some other films I heavily enjoyed this year, those being – Irrational Man, The Wolfpack, Love & Mercy, Tangerine, Time Out of Mind, A Pigeon Sat On a Branch Reflecting On Existence, Dude-Bro Party Massacre III, Sicario, The Martian, The Big Short, and The Hateful Eight.