THE COST OF SILENCE

In the wake of the Trump Administration’s Expanded Drilling Plans, THE COST OF SILENCE subjects Kindra Arnesen & Dr. Riki Ott are plaintiffs in an action that warns of the “Next Big One” and the need for action against hazardous Chemical Dispersants.

Secretly filmed over nine years, THE COST OF SILENCE is a harrowing account of an oil-drilling insider uncovering a devastating public health disaster and the coordination between government and industry to silence the victims in the race to open the entire U.S. coast for offshore oil drilling. The film had its World Premiere at the 2020 Sundance Film Festival in the U.S. Documentary Competition section on Monday, January 27th.

Kindra Arnesen & Dr. RIki Ott, who are primary characters in Manning’s documentary, were named today in a lawsuit filed by the University of California Berkeley and the Biological Center for Diversity to seek urgent Environmental Protection Agency action against hazardous chemical agents, such as Corexit, used in response to oil spills. In the wake of disasters like the BP Deepwater Horizon oil spill and Exxon Valdez, the combination of chemical dispersants and crude oil have proven to be more toxic to humans and the environment than the oil itself.

Ahead of the lawsuit announcement today, Manning, Arnesen, and Ott spoke movingly at the Sundance Film Festival during the film’s Q&A sessions about the ramifications of these dispersants, urging the Sundance audiences at their screenings to take action.

Director Mark Manning said, “As an oilfield diver I knew that the industry story of the BP well blowout and spill response was suspect. But over 9 years of making this documentary, I was unprepared for the horrendous health crisis we saw spreading across the Gulf states. The courage of the people speaking out against incredibly powerful forces has given me the motivation and inspiration to keep making this film and get this story out to the public. Now, by premiering at Sundance, our film and the people suffering from this spill have been given a global stage and I am honored to be a part of that. With the filing of this suit, the hundreds of thousands of victims will finally have a chance to force the federal government to step up and protect families and communities threatened by oil exploration near them.”

Dr. Riki Ott said, “Watching Mark’s film took me back 30 years to the Exxon Valdez oil spill. Same hazardous dispersants, same human health symptoms. I feel like this film gives us a tool to build public awareness about the horrific human suffering and sicknesses that have followed in the wake of the BP disaster. This is happening now. The film and lawsuit combined give us tools to leverage that public awareness into stopping this from happening again during the next big spill. I petitioned EPA to update our nation’s oil spill contingency plan and to restrict dispersant use in 2012. This lawsuit is a result of EPA’s failure to act. Please engage4solutions!”

Kindra Arnesen, based in Plaquemines Parish, LA, is a member of a commercial fishing family who became sick after BP’s oil spill and the EPA’s authorized use of Corexit dispersants in response to the spill. Dr. Riki Ott, a marine toxicologist and the director of Earth Institute’s A.L.E.R.T. project, is the lead plaintiff and has advocated against chemical dispersants since Exxon Valdez. 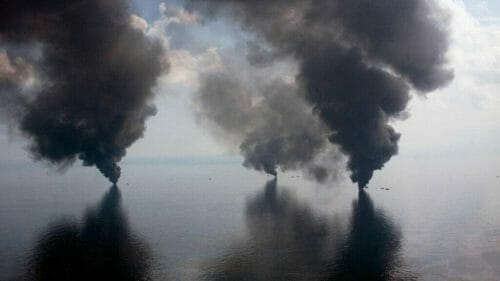 Additionally, Manning and the filmmaking team behind THE COST OF SILENCE have devised an impact campaign ENGAGE4SOLUTIONS.COM, which includes a web platform and two apps that will empower THE COST OF SILENCE audiences to immediately help the subjects in the film and engage in their partner organizations’ ongoing actions. Partners include Sunrise Movement, 350.org, Our Revolution, Greenpeace, Food and Water Watch, Physicians for Social Responsibility, Louisiana Environmental Action Network, The Environmental Working Group, Public Citizen, Sierra Club, Clean Water Action, Friends of the Earth, Surfrider Foundation, Public Interest Research Group, Fenton Communications and others.

The Cost of Silence exposes a hidden health crisis affecting hundreds of thousands of people along America’s Gulf Coast in the wake of the 2010 Deepwater Horizon oil disaster. In early 2018, the Trump administration, working with the oil industry, began the world’s most extensive offshore drilling expansion plan, a plan that relies on this story remaining untold.

As the film’s director and a former oilfield diver of 20 years, I knew the Deepwater Horizon blow-out in 5000 feet of ocean water was going to be catastrophic. No one had ever tried to cap a well this deep or clean up this much oil. For 187 days, the oil gushed unabated into the depths of the Gulf of Mexico. I thought that this event would be the end of the oil business as we knew it: the world would have to come to terms with the horrendous risks of extreme oil development. Over nine and a half years of uncovering this story and scores of production trips across the Gulf states, I began to realize that the catastrophic consequences of America’s largest environmental disaster are being hidden from the world. The victims erased, like the oil.

To ensure the stories of this disaster are heard, we have developed a social impact campaign to be launched with the film that is designed to put this issue on the national agenda in the 2020 elections and empower large-scale social action. We have assembled an Emmy and Academy Award-winning team of filmmakers and a renowned group of social change professionals. The team includes the former president of CBS and Sony Entertainment, the filmmakers of The Cove, Racing Extinction, Before the Flood, and The Final Year, and the social media team behind An Inconvenient Sequel, Gas Land, and Years of Living Dangerously. Additionally, the project has partnered with leading environmental and health justice organizations with over 10 million members to promote the issue and empower large-scale audience participation.

You can learn more about their Impact Campaign here: https://www.costofsilencefilm.com/