WHERE:        This fundraiser is hosted entirely online at GrammyFoundationGivingDay.Org

The GRAMMY Foundation Grant Program provides funding for initiatives that store and preserve the musical heritage of North America for future generations, as well as scientific research projects related to the impact of music on the human condition. These programs help advance our collective knowledge of the true power of music.

High school singers and instrumentalists can audition for the GRAMMY Camp — Jazz Session. Selectees receive an all-expenses-paid trip to the host city for the annual GRAMMY Awards, and students participate in high-profile GRAMMY Week performances and recording sessions and will attend the GRAMMY telecast.

The Music Educator Award was established to recognize current educators (kindergarten through college, public and private schools) who have made a significant and lasting contribution to the field of music education and who demonstrate a commitment to the broader cause of maintaining music education in the schools. A joint partnership and presentation of The Recording Academy and the GRAMMY Foundation, the second annual award will be presented at the Special Merit Awards Ceremony & Nominees Reception honoring recipients of the Lifetime Achievement Award, Trustees Award and Technical GRAMMY Award during GRAMMY Week 2015.

The GRAMMY Foundation was established in 1988 to cultivate the understanding, appreciation and advancement of the contribution of recorded music to American culture. The Foundation accomplishes this mission through programs and activities that engage the music industry and cultural community as well as the general public. The Foundation works in partnership year-round with its founder, The Recording Academy, to bring national attention to important issues such as the value and impact of music and arts education and the urgency of preserving our rich cultural heritage. In recognition of the significant role of teachers in shaping their students’ musical experiences, The Recording Academy and the GRAMMY Foundation partnered to present their first Music Educator Award in 2013. Open to current U.S. music teachers in kindergarten through college, the second Music Educator Award will be presented at the Special Merit Awards Ceremony & Nominees Reception during GRAMMY Week 2015. To nominate a teacher for the third annual Music Educator Award, please visit GRAMMYMusicTeacher.com. 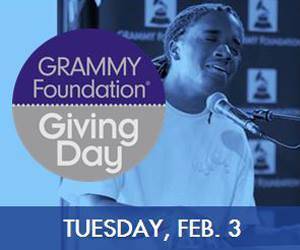 For more information about the Foundation, please visit www.grammyfoundation.org.