AND ON VOD AUGUST 7, 2015 on these platforms: iTunes, Google Play, Amazon, Vudu and Xbox and on cable and satellite providers, including:

Written and Directed by

ABOUT THE PRODUCTION In 2012 Oscar winning Character FX studio Amalgamated Dynamics, Inc., posted a video of their animatronic effects that were cut from the film The Thing 2011. Their incredible work had been replaced with CGI. ADI co-owner and writer/director of Harbinger Down took note of the fan outrage.

“Genre fans had been seething for years about big studio over-reliance on digital effects. Most feel CGI creatures look less convincing in modern movies than the Practical Effects of the films of the 1980’s. The Thing 2011 was the last straw. “ 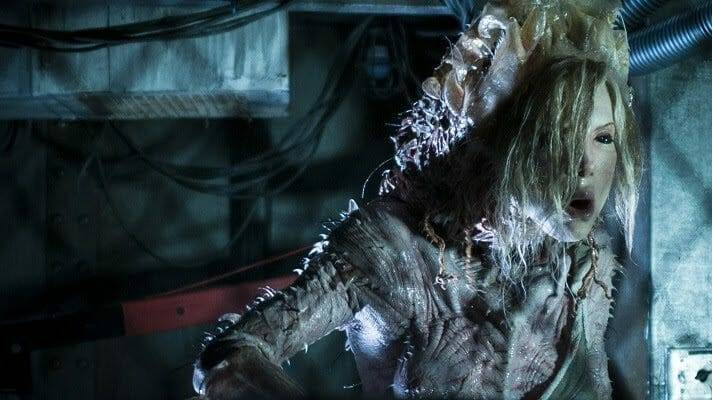 It was then that Gillis decided to present the fans an offer: fund a feature that would be an homage to the sci-fi/horror films of the ’80’s and he would write/direct it, and his company would create the creatures. There would be NO CGI creatures in the film. As an added bonus longtime genre favorite Lance Henriksen would star. The result:Harbinger Down was the highest funded sci-fi/horror project in Kickstarter history.

This was the moment of conception for ADI’s film production wing, StudioADI.

During the scripting phase, Gillis was contacted by Sultan Saeed Al Darmaki, owner of Dark Dunes productions who brought further funding. Al Darmaki is an Abu-Dhabi based film maker and PFX enthusiast who represents the global reach of Practical Effects fans. He serves as Executive Producer of Harbinger Down, which is a co-production between Dark Dunes and StudioADI.

Also on the Production team is Producer Tom Woodruff, Jr. Prior to co-founding ADI, Woodruff worked on the PFX of such films as Terminator, Predator, and Aliens. He is also a Visual Effects Oscar winner for Death Becomes Her. Gillis then assembled a powerhouse team of effects artists for the production. Oscar nominee Patrick McClung (Armageddon, Aliens) came aboard as VFX Consultant. Oscar winning Physical Effects wizard Michael Lantieri (Back To the Future, Jurassic Park, Flight) served as Special Effects Consultant. Director Stephen Norrington (Blade, League of Extraordinary Gentlemen) put on his visual effects hat and handled compositing.

Gillis wrote the script entirely at the Calabasas Public Library, in part because “It was the one place in Calabasas I was sure I wouldn’t run into a Kardashian.” The film itself was shot in in Chatsworth, Ca. The challenge of turning a warehouse in the Valley into a crabbing ship stuck in the middle of a storm in the Bering Sea might have daunted other film makers, but Gillis’ early training at low budget guru Roger Corman’s New World Pictures was invaluable. Says Gillis, “Harbinger Down boasts production values far beyond the reach of most modest budgeted films. Using a combination of re-purposed set flats and found objects (set dressing came from an airplane graveyard in the Mojave) I worked with the set builders to create the ultra-convincing interior environment of the crabbing ship, Harbinger.” Some in-camera illusions were simple but effective: for cold weather vapor breath the actors inhaled non-nicotine vegetable oil E-cigarettes, giving the illusion of an arctic environment. In old school fashion, Gillis eschewed green screens and built the actors actual environments in which to immerse themselves, which translates into better performances. “When the actor believes it, so does the audience,” notes Gillis.

Miniatures played an important role in creating a plausible world as well. ADI built miniature ships of varying scales, frozen arctic seas, a collapsing mountain of ice, miniature creatures and even miniature versions of the interior sets as well. Techniques the team honed on films such as Aliens and Tremors were employed invisibly to create a seamless blend of full scale and miniature environments. Big Hollywood might choose CGI, but once again the Harbinger Down team chose the tactile realism of PFX.

Gillis cut his teeth in the ’80’s, working on some of its greatest sci-fi/horror films such as Tremors, Aliens and Predator. While Harbinger Down is a love letter to the great sci-fi/horror films of the ’80’s (specifically Ridley Scott’s Alien and John Carpenter’sThe Thing) it is still a modern movie. It was shot on digital cameras, and yes, CGI was employed. Says Gillis, “My philosophy is that for horror effects, if you want it to look real it has to be real. CGI should only be used to enhance the Practical Effect.” To that end Harbinger Down used digital compositing, lens flares, snowfall, and post-added camera movement. Color grading added a final patina to the image, making the environments increasingly grim as the story progressed.

Gillis is of the opinion that part of the reason genre films from the ’80’s still resonate goes beyond the image or the effects. According to Gillis, “In the pre-digital era writers and directors couldn’t rely on CGI to provide excitement and thrills. They had to look inward into the characters rather than outward to an unlimited universe created by graphics.” Harbinger Down seeks to draw the viewer in to a realistic world populated by characters you love…or love to hate. Like Alien and The Thing, Harbinger Down is not a movie with a body count. Each character’s death should make you feel something. This is where each performance in the ensemble is critical. “We were lucky to have such a diverse group of talented actors to work with. Each actor added to their character’s unique voice while still supporting the ensemble,” notes Gillis.

In an era of runaway production, Gillis is proud that Harbinger Down was shot entirely in Los Angeles.