A.L. – Well I just really wanted to make a feature film, so I started to come up with some sort of scenario, and I just thought this would be makeable. And then I hoped that I could create a character that would be interesting enough to sustain this. So then I thought about the characters, and giving them this sort of forced meet, and they’re forced to start to have this relationship, and then regarding the park bench, this could be where they meet. With one location, that’s doable, I can manage that and make a feature. So that was the idea of it.

A.G. – Being that it’s filmed mostly in one location, did you take any inspiration from other directors or films? Roman Polanski came to my mind when watching the film. And your short film ‘The Last Stop’ is based simply at a train station.

A.L. – Well part of it to me I think is I really enjoy writing dialogue. Other films that stay in location tend to be genre films, and there is something else happening there, and that’s not really my style. I really just sort of let go of the concept of plot.This is more of the sense of people’s writing I admire, like James L. Brooks. I didn’t have to focus too much on the fact it was in one location. I just thought about what would they talk about that would make this interesting, so people could go along with it.

A.G. – The film production of the new Alejandro Inarritu film ‘The Revenant’ is gaining a lot of controversy for the harsh conditions that the director supposedly put the actors and crew through. As for you, you made a film all in one week, and even though the subject matter is simple and pleasant, it’s still an intense shoot. So in your eyes, as a director, when is it that a director goes too far to create their vision?

A.L. – That’s a good question. I mean, Inarritu is a very good director, so all I can talk about really I guess is I feel a tremendous amount of responsibility for my actors. I think some directors could think differently, and rather it’s two hours of my vision, and that’s what’s important to them. On this, there was a small budget, which is why it was filmed out of order, and things had to be shot at certain times, because we only had so much, and you’re restrained to what your budget and your time is going to allow you. But if you could get away with it…I mean Kubrick managed to do 75 to 150 takes of every shot, and to this day he still has people lining up for it. So it just depends on what you’re allowed to do.

Here is a little background on Ann Leschander (Writer/Director):
Writer/Director Ann worked as a singer in commercials, bands, and musicals across the U.S. After singing a creepy lullaby on a horror film directed by Danny Huston, she realized she wanted to be a filmmaker. Ann attended the USC School of Cinema where her first short film, Trust, won the prestigious Women in Film Crystal Scholarship. Her next film, The Day Before, garnered the James Bridges Award for excellence in directing.

The Day Before has screened extensively at over 30 festivals worldwide including Telluride, Palm Springs, Toronto, Paris, and New York, winning the “Best of the Fest.” It was also featured on the PBS Series, Fine Cuts. Ann has worked as a Writer/Producer for National Geographic, Discovery, A&E, The History Channel, and Game Show Network. In addit ion, she has produced documentaries including The True Story of the 761st, Standing Tall at Auschwitz, Inside Opus Dei, and Heaven: Beyond the Grave. Ann received a B.A. in English from Colgate University and an M.F.A. from USC School of Cinema.

Below you can find a trailer of The Park Bench and the imdb link to keep up in the future.
[youtube link=”https://youtu.be/S1Jh3EYETG4″] 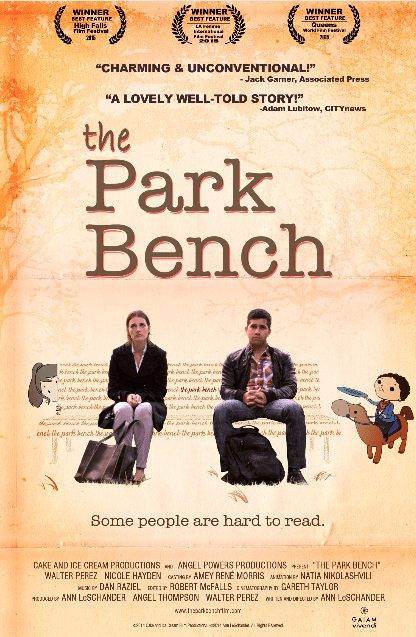 The Park Bench is playing in LA at Arena Theaters starting August 21st.

Keep up with Ann @AnnLeSchander and where to see it at http://TheParkBenchfilm.com