Q: [Arthur Glover] – So since this is your film debut, please tell me a little bit about yourself, like where you come from, your background, and how you got into film making.

Q:  So how did production for this documentary begin, and what brought you into H.R. Giger’s strange, beautiful world?

A: [Belinda] – Well it started by coincidence, if you want. So I met H.R. Giger’s former life partner, Sandra Beretta, you see her in the film. She introduced me to him, and she opened the door, if you want. And the thing is, it was really interesting that I met him, because of course I knew the art of H.R. Giger has produced, and it had quite an impact on me, but I left it a little bit out of sight over the years. And then when I met Sandra Beretta, she started talking about Giger, and immediately the old incentives came back to me. I think there is also a huge quality in the work of H.R. Giger, if you have seen one, a picture of him or his work, you don’t forget it anymore. So immediately I was  really interested, and then she invited one evening to visit him, and the very first moment I entered his house, I was completely fascinated, I was overwhelmed, by all of the details. the house is extraordinary, it very, completely unusual. I don’t know what I had expected, about H.R. Giger. I thought he would be reserved, or a distant man, and a dark character, I don’t know…just based upon his art. But he was really the opposite, he was such a nice, warm, and kind man. So I was completely surprised, and I think it was that very first evening that I thought I want to realize this film. If you try to visualize it, his house is like a playground, and then you have this man, who is so nice, and so kind, it fantastic work there.

Q:  The train track he built around and through his house blew my mind.

Q:  The way you made this film was interesting, because it felt more like an art film about an artist, rather than a documentary about him. When you initially approached making this film, how did you want to make it, and what was it that you wanted to deliver when people watch this?

A: [Belinda] – yeah, it was absolutely not my intention to realize a conventional biography of H.R. Giger. I didn’t want to stuff it with photographs, and who he was when he was a child, and that he was born in 1940. I didn’t really want to do that, you can read his biography on the internet, or his many books and publications. So I didn’t want to do that, this was not my intention. It was my intention to show the world in existence, and his extraordinary house, and what else he has in his art, which is all consequences, and consequences. I said that this was quite unusual, and that is what I wanted to show. And at the same time, he was in this caring home, and he nice, and very charming. He was a good man. So I wanted to show that.

Q:  Tell me about the old footage of H.R. Giger that you used in the film.

A: [Belinda] – I think this is great footage. It’s from a documentary from 1971. Fredie Murer, he was a friend of Giger’s, he was a good director. He got famous because he had an Academy Award nomination once, and then he did this documentary in 1971. So I went to Fredie Murer at his home, and I told him about my project, and I asked him do you have this film? Do you have outtakes? And yeah, he went looking for that, and he found it! So I’m really very happy to have all of this footage, and some outtakes that have never been shown before.

Q:  So being that you’re a first time director, and that you’ve now made a film about a subject/person, being H.R. Giger, who died at the end of shooting in May 2014, did you change the way that you wanted to deliver the film after a tragic event like this happens? Especially since you are the last person who will be making a film about him, that seems like a huge task at hand.

A: [Belinda] – Yes, yes, absolutely. I mean, I was shocked when I got the message about his death. But you know, I didn’t change the product, if you want. I didn’t change the film, or the concept of the film. It’s exactly the same film, I would be the same film, if he we’re alive. But of course, I was shocked and pretty sad. It changed the production of the film now I think. There are things in the film that emotionally, I’m very attached to them. For example, when H.R. visits his old room. You can see it in the last scene in the film, when he enters his spell room at the Gruyères Museum, he says it was one of his favorite rooms. That’s the very last time he enters that room, and he did it for us. I remember exactly calling him, and telling him we really need to do this, you have to come to the museum in Gruyères, and finally he showed up and came, and now we are very glad to have this scene, because it was the very last time he was there.

Q:  Yeah, and in the film it’s a beautiful way for him to go out. He also states in the end of the film that’s he’s done everything he’s ever wanted to do, and he’s lived the life he’s wanted to live, so at the same time it’s also very peaceful when something like that happens. And now you have this film to show it.

A: [Belinda] – You know, this is something that impresses me the most about H.R. Giger, that he followed his dreams, no matter what people thought or said. I mean his art, it’s very provocative, I can only imagine what people said in the 60’s about his work, and his art. He stuck to his own path, which I think is very inspiring, not only for artists, but for your life. He did what he wanted to do, he tried many many things, he never did what the art establishment expected of him to do, he did what he wanted to do. He said – okay, then don’t show my work in the well established galleries, so what can I do, I can put them in old museums. And he did it, and this is really very inspiring. 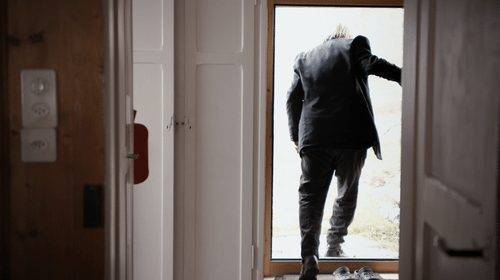