Maps to the Stars, film review by Arthur Glover

With audiences still in the dull pits of the early 2015 movie year, two hugely entertaining films have now arrived in select theaters. There’s last week’s foreign film release Wild Tales, from talented Argentinian director Damian Szifron. And now there is the new film from master director David Cronenberg, Maps to the Stars. Of course, the price of admission to both cost blood. Not to mention creative nirvana.

For a while it seemed Maps to the Stars would never get a US release in theaters. Be glad it has. Not since Robert Altman’s The Player has there been a better and more twisted satire about the disturbing twinkle that is Hollywood. And Cronenberg crafts his most personal film since Eastern Promises, working along with a literally killer script by Bruce Wagner(Nightmare on Elm Street 3), which was originally written back in the 90’s, when he himself was working as a limo driver at the Beverly Hills Hotel, driving around the celebrity slime that Los Angeles still has to offer. The darkest irony is how relevant his script is even today. Boy is it ever.

So it’s obvious that Hollywood is the land of the self-centered and depraved. What makes this film worth it’s two hours, is how Cronenberg crafts LA into a even bigger nightmare, infusing it with his usual themes, like violence of the mind, and the sexuality that comes with it. Shit, he’s been doing this for decades(Scanners, Dead Ringers, A History of Violence). And yet the haters still wanna hate. 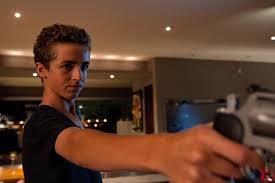 Don’t get me wrong. You will be pushed to your limits. Filming for the first time in the US, Cronenberg catches all the glitz, the glamor, and of course sexual- gore of the city of angels. The story focuses on the filthy rich Weiss family, led by celebrity therapist dad Stafford(John Cusack, amazing), and mom Christina(Olivia Williams) acting as a full time manager for their uber-famous child star son Benjie(Evan Bird, doing a scary riff on Justin Beiber). It’s not a pretty portrait. This family is hiding a mound of secrets(maybe too many), and their table talk sounds like business meetings. But you will be riveted big time by Evan Bird’s performance as the spoiled Benjie. Whether he is having poop discussions at a mansion party, or calling his much younger co-star a piece of shit, you can’t take your eyes of him. Benjie is dark cloud of the modern celebrity in meltdown.

Speaking of meltdown, wait until you see one of Stafford’s clients, the famous actress Havana(newly Oscar winner Julianne Moore). Matching Evan Bird’s performance, Moore turns desperate Havana into a sick twist of a character. Moore is one of the best actors on the planet, and seeing her do something this wicked is not to be missed. Eager to get the role in a film where she would be playing her mother(did you talk to Damien?) Havana let’s her agent know she needs a new “chore-whore.” Then a mysterious girl with burn scars shows up (Mia Waskowska), in a limo driven by Jerome(Robert Pattinson basically playing Wagner) and a holy-hell pit of secrets around all characters are unleashed, involving incest, lies, and fire.

No fair to spoil more. Just prepare for Cronenberg and  his cinematographer as usual Peter Suschitzky to toss you into disturbingly funny images of the real and the surreal. When some of the characters start seeing ghost, you might wonder what the fuck you got yourself into. But what makes Maps to the Stars something to remember though, is how Cronenberg show us an uncompromising look of Hollywood-land, and how it’s reality and depravity can relate to everyone else in modern society that dreams of more.  After the film’s rather unsual end, you won’t know what just hit you.