BOSTON, MA; January 29, 2020—Today, the award-winning science series NOVA, produced for PBS by WGBH Boston, debuts an ambitious, multimedia experience taking viewers on an epic adventure to explore the dynamic history—and future—of ice at the Earth’s poles. Kicking off the initiative, PBS Digital Studios is launching a new science-focused YouTube channel, PBS Terra, with ANTARCTIC EXTREMES—an original NOVA digital series about discovering what it takes to do scientific research in Earth’s most remote natural laboratory. The 10-part series follows hosts Caitlin Saks and Arlo Pérez as they set up shop at the largest research base in Antarctica and embed with scientists and support staff alike to find out what it’s like to live, work, and do science on our southernmost continent. Both PBS Terra and ANTARCTIC EXTREMES launch Wednesday, January 29, 2020 and will live at youtube.com/pbsterra.

ANTARCTIC EXTREMES is fun, quirky, and at times deeply personal as Caitlin and Arlo reveal the true Antarctica: a land where science and survival intersect. They join researchers to investigate curious topics such as the secret to seal pup survival, the mystery of a blood-red glacier, and an underwater robot that might offer clues to how fast Antarctica will contribute to sea level rise. As they explore magnificent locations—from the depths of an ice cave to the peak of an active Antarctic volcano—they reveal the trials and triumphs of life at the bottom of the world. What do you eat? What is it like to be disconnected from civilization? How do you stay warm? And, of course, what do they do with all the poop?! Watch the series trailer here.

Across 10 episodes—running approximately 7-10 minutes each—the series reveals a world that is sometimes harsh, sometimes hilarious, sometimes gross, but always thrilling. Episode 1, “Journey to the Bottom of the Earth,” follows Caitlin and Arlo as they embark on their mind-warping journey to Antarctica.

“While our planet’s poles are scientific frontiers, PBS’s exploration of digital platforms and strategies for serving new online audiences continues to evolve.” said Brandon Arolfo, Head of PBS Digital Studios. “PBS Terra will serve as an ambitious new hub for science, nature, and other STEM content on YouTube and other platforms. We’re excited to launch with NOVA’s innovative new series, ANTARCTIC EXTREMES beginning an engaging slate of science-focused content featuring the best digital STEM series from around the country.”

In addition to ANTARCTIC EXTREMES, NOVA’s multimedia polar experience includes short-form videos, web articles, social media content, and the POLAR LAB—a free, interactive, game which teens can use to explore the science of our polar ice caps. The latest installment in the popular NOVA Labs platform for middle and high school students, the POLAR LAB blends clickable 360 landscapes, 2D and 3D videos, animations, interviews with scientists, and mini-games to take players onto the ice and into the laboratory to answer big questions about Earth’s climate—past, present, and future. It also puts them in the driver’s seat, as they work with host Caitlin Saks at “Polar Lab HQ” to collect data from the field, answer questions, and play games to keep the story moving through three action-packed missions. The POLAR LAB will live at pbs.org/nova/lab. Watch a trailer for the POLAR LAB here.

NOVA will also engage science educators by producing educational resources from POLAR EXTREMES broadcast and digital content that will be distributed on PBS LearningMedia—bringing climate science education into classrooms around the country. And, a public screening campaign, in collaboration with science museums across the country, will invite community conversations about the climate record and our future in the face of global climate change.

NOVA’s extensive polar experience will culminate with POLAR EXTREMES, a one-night, two-hour special for PBS by WGBH Boston premiering Wednesday, February 5, 2020 at 8 p.m. ET on PBS. Hosted by renowned paleontologist Kirk Johnson, the special takes viewers on a dramatic and surprising adventure from pole to pole and back in time—650 million years ago to present day—to uncover the extraordinary story of the Earth’s poles and their changing climates.  In addition to premiering on PBS, POLAR EXTREMES will be available online and on the PBS Video app, and will air in its entirety on NOVA’s Facebook page beginning at 8 p.m. ET. Many of the program’s experts, including host Kirk Johnson, will be on Facebook and watching along to answer questions from the audience. Watch the trailer here.

Featuring stunning footage from some of the most spectacular locations on the planet, combined with rich, 3D graphics of long-lost landscapes, POLAR EXTREMES immerses viewers in a scientific quest to explore the unexpected secrets of our planet’s polar past. Why were the North and South Poles virtually ice free for much of the last billion years?  Which triggers turned a balmy “Hothouse” Earth—home to dinosaurs for more than 150 million years—into a frozen “Icehouse” landscape?  What drives the poles to such extremes?  And, can the stories of the past reveal what will happen to the poles—and the rest of our planet—in the future?

To search for answers, Johnson, the Sant Director of the Smithsonian National Museum of Natural History, travels back in time to find out what the Arctic and the Antarctic would have looked like millions of years ago. This epic journey takes him to some of the most remote places on Earth, including a gold mine in the Yukon, Greenland’s largest glacier, fossil sites in Antarctica and the Arctic, and more.

“This is a truly eye-opening trip through time, because the poles not only changed in the past, they’re changing today,” said Julia Cort, Executive Producer or POLAR EXTREMES for NOVA. “What forces were at work then, when the Arctic was a swamp or when Seattle was under three thousand feet of ice? And what’s happening now? POLAR EXTREMES gives us an incredible opportunity to find potential parallels to our present—and future—climate story.”

In the past, long before humans arrived on the scene, greenhouse gasses that warmed the planet came from natural sources. Johnson visits an active volcano in Mammoth Lakes, California to capture the CO2 still seeping from the Earth. Today, much of the carbon emitted to the atmosphere comes from another source: the burning of fossil fuels. Johnson dramatically demonstrates just how much carbon we’re adding to the air with the help of a 1965 Rambler convertible, a bag of charcoal briquettes (representing what Johnson calls “car turds”) and some provocative computer graphics.

POLAR EXTREMES shows that the Earth’s distant past is directly relevant to our collective future.

“Humans are geology, and we are impacting this planet,” said Johnson. “This is the first time that a mammal has actually changed the composition of the Earth’s atmosphere and driven a dramatic change in the Earth’s climate. The question is, are we clever enough and forward-thinking enough to flip that switch back?” 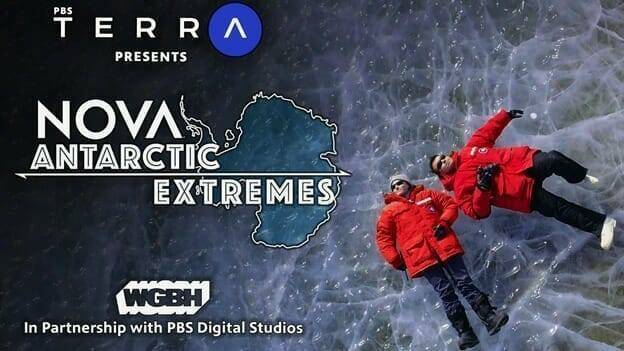