Obey Giant takes people deep into the underground world of street art, profiling the rise of artist Shepard Fairey from his roots in punk rock and skateboarding, to presidential politics—through his iconic Obama “HOPE” poster and the controversy that surrounded it.  It was directed/produced by Academy-Award winning filmmaker James Moll, and the Executive Producer was James Franco. After the completion of the film he was cited by the city of Detroit for the malicious destruction of property. If convicted he faces 10 years. Coming from a city that is trying to revive itself, it’s quickly making itself look like Alabama.

A few times in the movie you could see the legal battles that seem to inevitably follow any glory. The AP spent $15 million on a legal battle over him using a photo by the AP of Obama, that was turned into the (transformative) HOPE image that we are All now familiar with. But the ridiculousness of this is-not only was it because of a silly mistake of him not knowing what photo he used (because he just google searched images and used one, like many of us do!), but it was artwork done from the beginning to the end for free – and never with monetary incentive. Yet the AP felt the desire to try to destroy him over one completely transformed image? The Obama campaign never even spent money on it because Shepard didn’t want it to be about money or an agenda. He literally had printed thousands of posters and stickers at his own cost. It was, like all of his art, about a bigger message just to make people think… but not to give them direct answers (inherent in any political agenda). 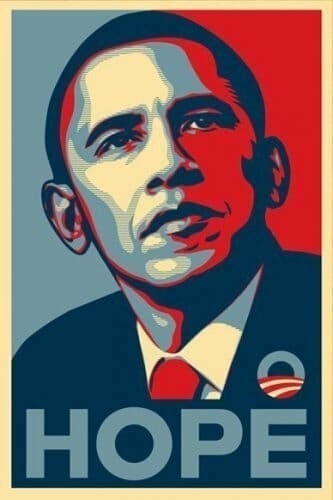 My favorite part of the whole movie was in the beginning, where I feel that it really captured his work as a whole. He realized that people wanted the answers given to them, and that people got very uncomfortable and sometimes angry when they were asked for the answers, or their interpretation. Reason being; we as a culture are so spoonfed what to think, what to do, when to do it, what is right/wrong… that when asked to give rather than to receive the answers; people would often short circuit and shut down, panic, or even get angry. Shepard started spreading his Andre work just because, and noticed that people started to become obsessed with what exactly the Andre The Giant OBEY “means”. So people would Always ask him, and he would respond with “what does it mean to you?” But people just wanted the answers, and didn’t want to give the answer.. and as he explained – they would get really uncomfortable with their own interpretation because it might be “quote and quote wrong by the experts on the subject.” And he said “it hit me, what do people do the most subconsciously, but that they resist the most in a way that they are conscious of? Obey.”

Early in the movie also really explains the motivations behind his work, (and also makes you think again!) by showing a big inspiration of his, the movie “They Live” by John Carpenter. It starred Rowdy Roddy Piper and had set design styles that seemed to be inspired by one of his favorite artists, Barbara Kruger. The film was about everyone in the world living under alien control but not knowing it. When Rowdy Roddy Piper puts sunglasses on for the first time, he saw the advertisements that we normally see like “Sale” actually saying “Consume”. And billboards we see everyday actually saying “Marry and Reproduce” or “Submit”. And above all, and overall, you guessed it!! “OBEY”.

Overall, it was a really well done documentary, very thorough and never dull, and it not only teaches about the roots of street art, and teaches about Shepard Fairey and his journey (better and worse!), but above all, it makes you think about your own behavior and If you are capable of real independent thought and behavior, or if you have become a product of a society that aggressively yet subliminally enforces what to do and think on a daily basis…  and if you are even capable of openly answering even the simplest questions like “what does his OBEY mean to you”? without breaking down into a puddle of panic.

It was just released today Nov 11th, 2017 exclusively on HULU.