The Best Films Of 2014 by Arthur Glover

Let’s face it. The 2014 film year was ultimately a drag, especially in mainstream releases. Luckily, it was also a huge year in experimental cinema, where top form directors brought us supremely weird stand outs. To hell with the Oscars. My top ten list includes films that took us places we’ve never been before.

Hands down the most ambitious, most entertaining, and most flawless film of the year. Director Alejandro Inarritu’s take on the showbiz industry brought us the comeback performance of the decade with Michael Keaton, who plays a washed up hero-actor turning to Broadway spotlight, and also the most visually creative film as well, thanks to cinematographer Emmanuel Lubezki’s genius camerawork. We can be hopeful, but it will probably be a long time before we see another film that’s this good.

Another classic example of what experimental cinema can do to you emotionally, writer-director Richard Linklater’s peak film is the best damn thing he’s ever given us, which is saying something. Spanning over 12 years of a boys life, Linklater films everything in real time, giving us a window as we watch a young Texas boy(a magnificent Ellar Coltrane) grow from age 6 to 18.

When you see the image of Ellar Coltrane’s Mason sitting out in the desert, overlooking the endless possibilities his future holds, you’ll look at your life the same way.

The weirdest movie of 2014 by far, the great writer-director Paul Thomas Anderson adapts Thomas Pynchon’s impossible novel with such skill, it will take you days to realize what you just witnessed. And Joaquin Phoenix’s performance as a stoned-hippie private detective keeps you riveted, as PT Anderson leads you through a maze of 1970’s psychedelia. 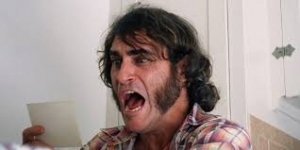 Even with doing more comedic material than usual, Anderson’s film still requires your full attention, refusing to do the work for you. It will make lazy audiences mad as hell, but everybody else will realize the facts – Paul Thomas Anderson is a director like no other, and Inherent Vice is his best film since There Will Be Blood, and the safest “high” around. Don’t even dream of missing it.

Director Damien Chazelle gave us the most bloody exciting film this year. The surprise? It’s a movie about a jazz drummer. As Miles Teller gives his best performance to date as the ambitous student drummer, he is emotionally and even physically beaten down by his monster of a conductor(an Oscar-ready J.K. Simmons). Even after the explosive ending, you’ll still be left on the edge of your seat.

Call this the Citizen Kane of sports films, director Bennett Miller(Capote, Moneyball) crafts a darkly lit character study of a wrestler(a never-better Channing Tatum) trying to win the gold under the leadership of a delusional millionaire(a deeply scary Steve Carell). The best actor Oscar belongs to Carell hands down.

Jake Gyllenhaal is scary-brilliant in this no punches pulled looked at what people get off on in today’s media. And first time director Dan Gilroy gives the best directional debut of the year. The ending car chase is worth the price of  a ticket alone. You gotta make the money first though, as Gyllenhaal’s Lou Bloom would say.

Making only his third film, director Jonathan Glazer showcased another brilliant form of creative cinema, by using hidden cameras to capture an intense Scarlett Johansson, who plays an alien driving around Scotland preying upon local men.

Wes Anderson takes his cinematic world to a whole new scope and scale with The Grand Budapest Hotel, featuring a surprisingly hilarious turn from actor Ralph Fiennes(Voldemort himself) as the hotel concierge.

David Fincher returned to grand dark form with his adaptation of Gillian Flynn’s novel(she also wrote the  film’s screenplay), and gave us the most brutal on camera take of a relationship gone wrong, in like ever. And Rosamund Pike gives a booming, volcanic, star-making performance as the Amazing Amy. By the film’s demonic, piercing end, you might consider leaving your boyfriend/girlfriend.

10) Guardians of the Galaxy