A.G. – So since you are a first feature film director, tell me a bit about yourself, and how you made your transition from starting as an editor in 2004, to directing a feature now?

MEL – Yeah, that’s quite a trajectory. I was living in Austin when I first started, I was making short films and messing around, and I was also playing music. It was a really creative time, around that time in Austin. I had dabbled with some short films, I’ve written some stuff, and I was editing my own films, and editing other people’s films. I met this producer that was making a film called Drop Dead Sexy, in Austin, they were finding the money in Austin. I just sort of latched onto him, and he gave me the opportunity to help him cut a little mood trailer for his film, and that started it. I got hired, I got to work with Sandra Adair, the Academy Award nominated editor for Boyhood this past year. But then I quickly got fired, and then I was hired as an assistant editor, and that’s really not…I knew has to edit scenes, I didn’t know how to organize a film. But then she had to move on, and then I got a job, the director kicked me up. So then I’m an editor, and I got to come out to LA and finish the film, and then working as an editor on other indies. Then in 2009 I edited the documentary We Live In Public, that won Sundance in 2009. I was one of a number of editors, I came on toward the end to help shape it, but that really opened up some doors to directing actually, like directing commercials. I got approached by a producer to direct some documentary-style commercials for Toyota and other kinds of brands, and other agencies. And then it was a bad time for raising money for films man, in 2009, and on. It was really difficult to get anything going. I had to sort of reboot, and then get going. I made a short film from the pages of the script of In Stereo  years ago. I shot a section of it just to show I could write, direct, and edit, and then years later, we hook up with this financier who’s interested in helping make some films, and he really liked the film, and I wasn’t even trying to make “In Stereo”, what had happen was I was trying to make another film, trying to get it going.. And then someone viewed the short, and then wanted to make the feature, and then suddenly I have to regroup, and get my brain back on “In Stereo”, and that’s how it happened.

A.G. – So was that how you made “In Stereo” from a short into a feature?  Did you have to do any crowdfunding to make the film?

MEL – We made it, we had it sitting on the shelf for a long time, we did get it into a few festivals, but it didn’t really take off. I went to work on some other films, and it was just kind of online, like you can have your website stuff. A producer I was working with at the time showed it to our investor, and he just liked it, and he gave us the entire amount. So we got to make it pretty quickly, from the time I got the word from my producer that we were going on a plane to New York, and then two weeks later we’re shooting three weeks later. So once we got the money from the investor it turned into reality. 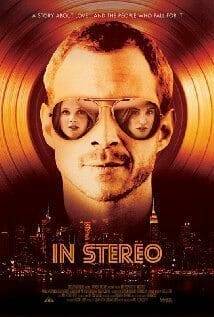 A.G. – What made you believe you could make a feature out of that short film? What drove you to do it?

MEL – Well, what drove me to make the story I guess was…when you’re a filmmaker, you know you’re making an indie film, you have to make someone know you can shoot quickly, and cheaply, and by any means necessary basically. And I was really on a Woody Allen kick at the time, and he’s making movies about people in their fifties and sixties having these problems, you know, and I figured look, I had a bunch of crazy friends in Austin, we were all dating, we were all messing up our lives, drinking heavily and partying, and just getting involved in relationships that didn’t last very long, where people were just kind of behaving badly, and I was just watching a lot of those early 90’s films, like Noah Baumbach and such. People are fascinating, and we can find drama in comedy, and you’re not thinking for your first film you’re going to make an action film, you’re going to make a character movie, which is the ones I like most anyway. So I decided to look into my own life, and my own circle of friends, and you know, the David character in the movie is a struggling artist, and I thought there was a funny metaphor for my life, when I was trying to make a film. And it was just going so poorly, constantly getting beat up, and the door slammed in my face. Well, in the movie, he’s actually inflicting bodily harm on himself, by getting involved in situations where he kind of gets beat up. So that kind of narrows my path, and the Brenda character is an actress that I know in Austin, who was having problems getting roles, and she was really snarky, and hilarious, and sweet, she was really charming and funny. I just kind of jammed those characters together, and then surrounded them with a bunch of stories with people I have either met, or from my own experiences and stuff. I didn’t want to make it a romantic comedy though, I don’t like romantic comedies, I like stories about people, and Woody Allen films to me are not romantic comedies. They’re just this  existential character pieces that are more than just finding the right partner, they’re also just about finding your place in the world, and work, and how to relate to people on every level, not just romantic. That’s what I wanted to do, but I also wanted to shoot it in a more dynamic way, than some of the classically shot films that Woody Allen has done. I love that stuff too, but my style is more kinetic, and I like to keep the camera moving more.

A.G. – Would you always want to be the editor for your own films after this one?

MEL – No, no way I don’t ever want to edit my own movie again if I can help it. It’s a lot of work. I mean, you’re always in the room, you’re definitely in the room, I just did it this time myself because  it was out of necessity in a way, just because it was so specific of a vision, with split screens, and the narrative was sort of structured in that non-linear way. I put it together from the beginning to the end, with a little bit of help from an assistant that put it together first. But if I can help it, I don’t want to do it again, I want to work with editors.

A.G. – After making this  film, is there something you learned from this that you’ll strive to do and deliver on your next one?

MEL – Well, at every level, I came into this with a piece of advice that someone told me, which is to just try to defend the craft at every level, no matter how small it is, no matter what is the budget on the next film, whatever the scope is, it’s going to be something that’s going to be limited, the resources won’t all be there, they never are. Even in the big movies, there’s always something that’s not quite enough. So I was able to get away from that on this movie, I really got to make exactly what I wanted to make, relatively speaking. There would have been some really crazy stuff I would’ve done to the camera, if I had more of that freedom, but for the most part, I got the make the film I wanted to make, and I just know that I can do it on that level, and I know to  just stand by your decisions, and be really singular with the idea and the vision I did that on this one, so I know I could do it with a bit more resources.