In the new film Walter, starring Andrew J. West, William H. Macy, and Neve Campbell, Andrew J. West plays the awkward ticket taker Walter, who has the ability to tell people whether they are going to Heaven or Hell. I got to talk to the film’s director Anna Mastro, who also has directed a number of commercials and music videos, as well as highly-praised short films. 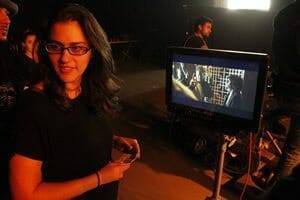 Q: Your film “Walter” was adapted from a short film also titled Walter, directed by Jonathan Dillon. The screenplays for both the short and feature written by Paul Shoulberg, and both star Andrew J. West as Walter. How did this feature project come about? And why did you feel you should adapt it into a feature?

Anna: Well, it was actually based on a short story before that. Andrew J. West, and our producer Brenden Hill, and our writer Paul Shoulberg all went to college together in Indiana, and they were friends, and Brenden said – Hey, I think this short story would make a very cool short film, so they adapted it into one. And then three years later they sort of cranked out a feature version of the script, and it came to me through an agent, and I kinda fell in love with it. It had a lot of heart, it had a lot of great characters, and really really awesome-classic hero story. So I had a meeting with Brenden and Paul, and we worked on the script for a couple months, so we could make it fresh and really cinematic, you know, it’s the movie I wanted to shoot. And so we started getting people attaching to it, and we just got so lucky. We didn’t even had any financing at that point, but we started roping people.

Q: How did financing for this film come along?

Anna: I don’t know, it’s probably because Andrew J. West and I had met before shooting. And it was just kinda one of those things, the movie doesn’t really fit into any financing safety box, like it’s not a genre film, it’s not a straight-up comedy, it’s not a horror film, it doesn’t have a big director, or giant stars. It was very much one of those things, like me and Brenden Hill, and our amazing producers running around and trying to get people’s money.

Q: I saw that the budget was right at 1 million on IMDB.

Anna: It was actually 700,000. It was tricky, and some of that money we got as we were shooting. As people started seeing our footage, we were able to get the extra money.

Q: When watching this film, I almost immediately felt the subject matter was very fitting with the quirky, yet complex and emotional atmosphere you create in this and some of your other bodies of work. Is there someone or something that inspired your kind of directing style?

Anna: It’s a weird accumulation of Office Space meets Ferris Bueller’s Day Off, meets stuff I loved growing up, and movies I was influenced by, and each project or story I want to tell is in a way drawn from things that inspired me. I think the style is very much a style that is a style of my own, and the production team that I’ve created, and the actors that get cast in the performances, and what they bring to it. It sets the tone for the movie, if you will. So that kind of style is what’s really fun for me.

Q: The short film you made called “Bench Seat” was written by Neil Labute. His early film’s, like “The Shape of Things”, seem like they would be an appropriate influence for the themes you cover in this movie, especially when it shifts from being funny to dark.

Anna: Yeah, I mean I’ve never thought of it that way before, but obviously I’ve gotten very lucky, and gotten to work with great writers. Neil Labute is amazing, one of the best playwrights of our generation for sure, and getting to take his work that he wanted to turn into a musical, and he also wanted to work with Teddy Geiger, who did the music for it. So we made this strange musical that was written by Neil Labute, and I wanted it to look huge. So we did this whole Kickstarter thing, but you can’t really do that with a feature, it’s just too much money, even though we made Walter for very little money. But yeah, I feel like you said that all of my work has this tonal thing, like light to dark, and I feel that’s true to real life, really. I think life has so many shapes and elements, and I really want to tell stories that have a lot of heart, and put people on that kind of journey.

Q: Soundtrack and music seems to be very important in your work, especially the score in Walter. Do you come from a musical background?

Anna: I cannot play one instrument, let me tell you. I wish that I could, I grew up trying to learn. But I was actually a dancer, so I grew up doing ballet, and performing in all of this stuff. But for Walter, for some of the music it was me asking like hey, can we use this song in this movie? I think we have so many cool songs in it, and then the score itself it literally almost a character within it’s self. The composer, Dan Romer, he just did Beast of the Southern Wild, and he just won a Grammy for the song he produced called “Say Something”, by Christina Aguilera. So he was an incredible person to work with, and he made all of this music, and then we put picture in, and then we would bring in a harp player one day, and a bunch of singers the next day, he did everything, he’s just amazing. I just love music, and I think things come to life with music, and that’s why it’s such a big part in what I do.

Q: When you’re trying to craft a story like Walter from page to screen, how did you approach doing that? Especially with a person with this unusual ability to tell people if they are going to heaven or hell, how do you go about capturing that kind of story?

Anna: I don’t know, we were thinking of so many ways to do it, like how do you telegraph someone telling somebody they are going to heaven or hell? You could use graphics or such. But Walter is such a unique person, that people didn’t really hear him say all of these things, and it was very much living in his own head, so we thought, let’s just have him say it out loud. Let’s just have him make these judgements. Everything is a little bit of a heightened reality with Walter, and he’s still quite a grounded person. He would have these imaginative moments, like with the girl in the movie theater, or watching the movie that was like a movie of his own life. I think a lot of that has to do with the heaven or hell thing too, like how can you judge someone with just a glance? He thought it was his job, so I don’t know, it was like let’s do it any way we can, let’s be as realistic as possible, just say it. There was a lot of conversations we had about it for sure.

Q: So you’re a young director, and this is your first major feature that you’ve made. So working in this kind of industry, how did you feel about it before you made this feature, and do you now feel differently about it after making this film?

Anna: I’m hoping people give me more opportunities, now that I have made a feature. I don’t know, I just love what I do, and I’m just thankful for everyday I get to do it. Telling these stories is part of who I am, I don’t really know how to do anything else, and it’s a very unforgiving industry, and it’s very hard to get a first shot, and it’s so great that we live in the now that we live, and everybody has access to HD cameras. You just have to put the work in, everyday. 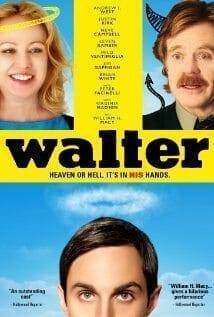 Walter will be released in limited theaters starting March 13th. For more information check out the film’s official website @ http://walterthefilm.com/

And be sure to check out other work by director Anna Mastro on her website, @ http://annamastro.tv/